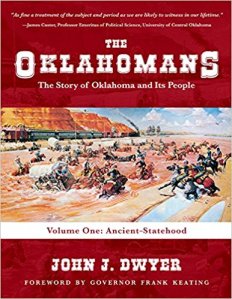 With a casual thumbing through John Dwyer’s new book “The Oklahomans,” many readers might think it is yet another Oklahoma history textbook with the usual catalogue of explorers and battles and superficial nods to the experience of non-white peoples in the state.

But they would be wrong. The title is the first indication that Dwyer set out to write an updated, less conventional history of the state by focusing on the particular character of the people who contributed to the state’s history and development.

Because Oklahoma is such a diverse state, this focus is a welcome treatment. In fact, in his introduction, Dwyer notes, “This volume and the next one aim to weave throughout the narrative the history, deeds, and varied opinions of minority groups such as African-Americans and Native Americans in the integrated way they should be, not just as add-ons or sidebars.”

Dwyer accomplishes this goal by managing to describe the pivotal events in our history, with a view from all of those who participated or influenced them and including photographs and artwork that respect and celebrate the state’s diversity.

History books of the past would never have included a chapter with such a title as “White Oklahoma.” All, or most, of the history would be white history by default. Dwyer also includes a chapter on the Christian missionary influence in the mid-19th century, another topic usually relegated to a sidebar in Oklahoma history.

Dwyer’s writing style is a step above usual textbook fare. In a chapter called “Uncivil War,” he describes the influence of Native Americans in the Civil War battles in Oklahoma. This passage about the battles at Mayes County’s Cabin Creek, led by Stand Watie, illustrates Dwyer’s narrative skill:

“That attack, crafted by Watie, was a stunning nighttime charge conducted under a full moon. The Confederates routed the Federal force, thus avenging the previous summer’s defeat on nearly the same ground. Then Watie deftly guided his force through a cobweb of pursuing Federal forces, escaping all the way to Texas with enough booty to clothe his entire army and feed every Confederate soldier and civilian in Indian Territory for over a month.”

With a background in journalism, education and both fiction and nonfiction writing,  Dwyer was asked to write a history of the state, and this two-volume work was later endorsed by the Oklahoma Centennial Commission. This volume covers ancient Oklahoma to statehood, and volume two, which will be out next year, will cover from statehood to the present time.

Dwyer will have a book signing for “The Oklahomans” at the Pryor Book Exchange and Bible Book Store on May 3, from 1:30 to 3:30 p.m.

Earlier that day, you can also see Dwyer at a Chamber event. He will be the guest speaker at the Pryor Area Chamber of Commerce May Forum Luncheon on May 3 from 11:30 a.m. to 1:00 p.m.

The luncheon will take place at the MidAmerica Expo Center, 526 Airport Rd.

The lunch is $12 for Chamber members and $18 for non-members. You can register at the Chamber website, pryorchamber.com or call 918-825-0157 for more information.